Another paddling and canoeing piece.... 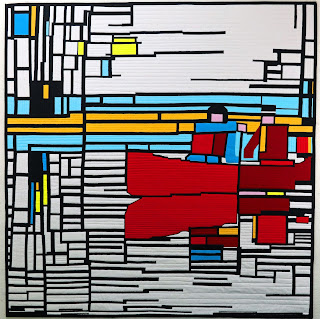 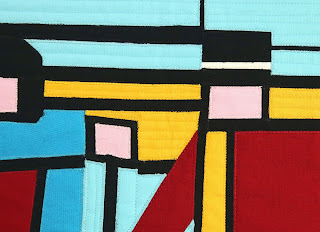 Lost in the Woods?

These are labeled Lost in the Woods.... do I know where I am going? What am I thinking about these days?

July 2020 Lost in the Woods #1 is on exhibit at Fibreworks Gallery in Madeira Park on the Sunshine Coast until August 12 as part of the connected show. https://www.fibreworksgallery.com/

Practicing for my tandem entry in the 2017 Yukon River Quest.

This piece Mondrian Paddlers was juried into the Canadian Quilters Association's 2017 National Juried Show. The original photo was manipulated with the Prisma app on my phone, then translated into textile.


Here I combine photographs and print to cloth to ask the rhetorical question, "Where IS the gold in Yukon?"


Photo transfer plus arashi hand dyed fabric... C'est L'aviron qui nous mene en haut.. It is the paddle that leads us on.

I learned to hand stitch at an early age, and still enjoy some projects.

Here I play with hand stitch and a paddle motif.


And some more paddles... Apparently I need to go somewhere. These are stenciled with oil stck over a pieced ground.

More play with the paddle motif. India ink and acrylic on cotton.

Posted by Katie Stein Sather at 8:14 PM No comments:

Quilts for Quest I

Here is a summary of the pieces I have made on the theme of Quest... I seem to be looking for something...

The Yukon River Quest begins with a mass start. One has to duck between other canoes and kayaks without causing interference yourself. There is no time to notice much more than glimpses of other boats.


By the time you get to Lake LaBarge, the crowd of canoes has thinned out considerably. And hopefully there won't be wind and waves.


The Yukon River Quest is an ultra-marathon race. Not only is it a difficult race physically, it's also difficult psychologically. Teams often have a tough time staying friendly during the race. This piece illustrates the stresses that usually come with the race. Adapted from a photo on the cover of the Whitehorse Star in June 2015.


Posted by Katie Stein Sather at 7:50 PM No comments:

From FAN's Ekphrastic exhibit, showing in Merritt, BC until the end of September, 2017

This is an interpretation of a poem by Tracy Hamon 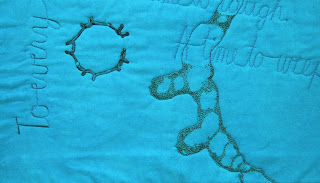 Posted by Katie Stein Sather at 9:25 AM No comments:

Yet another piece for the annual Cherry Blossom Festival, a Textile Translation to be at the Silk Purse Gallery in West Vancouver from March 21 to April 9, 2017.

Thickened dye and paint on thermofax from a photo of mine, pieced improvisationally. 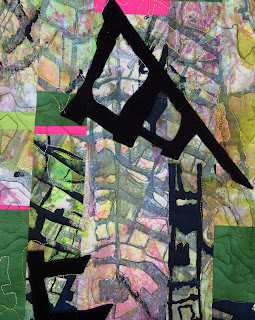 Posted by Katie Stein Sather at 6:38 PM No comments: